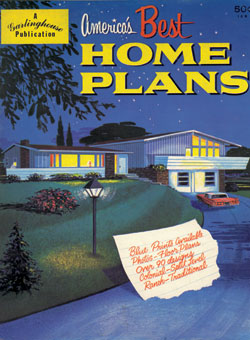 Over 100 years ago, Topeka, Kansas, homebuilder Lewis F. Garlinghouse had an idea to promote his construction business. He would arrange a display of photographs and floor plans of his bungalow designs and put them in the window of a local bank. Right away the display caught the eye of a building-and-loan executive from another town, who thought the Garlinghouse plans would be useful to builders in his town. Soon photos and floor plans were hanging in banks, thrifts, and lumberyards all around the region.

As it turned out, builders were interested in acquiring well-designed plans. But what actually jump-started L.F.'s business was the overwhelming interest his plans received from the general public. When people began asking where they could buy the blueprints, the home plan business as we know it today was born.

A little more than a decade later, by the end of World War I, The Garlinghouse Company was publishing its growing collection of home plans and marketing books and brochures to lumber dealers across the nation. Lumber dealers then distributed the publications to prospective builders to win their business while Garlinghouse sold the blueprints. Things kept growing. After World War II, the swell in demand for home plans prompted the company to sell its publications directly to consumers, who responded enthusiastically. The business thrived as new houses went up from coast to coast.

The Homes of America

It would be no exaggeration to say that Garlinghouse plans have been built into more homes than plans from any other source in the world. Before Lewis Garlinghouse came along, however, building a new home was quite a different proposition than it is today. New homes were designed either by architects, who specialized in one-of-a-kind home designs, or by builders, who worked from a set of hand-me-down plans that had been built, in one modified form or another, over and over again. But as people began moving from the farm to the city, the demand, not just for new homes but for new types of homes, surged. As the locations of homes changed, as modern neighborhoods and subdivisions were created, the demands on floor plans also changed. Big, rambling houses that worked well on the farm were no longer practical for small city and suburban lots. Yet The Garlinghouse Company was ready to meet those challenging demands with innovative floor plans and home styles, riding the wave of house design throughout the 20th century. It was an exciting time for architecture in America, which saw more new home construction than anywhere else in the world at any time in history.

One of the first home types that grabbed the attention of the new home-owning American public was the bungalow, a very popular plan for Garlinghouse. L.F. Garlinghouse is personally credited for creating the so-called "airplane bungalow," an unusual bungalow style with a glassed-in upper level that extends from the front to the rear of the house and resembles a cockpit. Our 1920s Bungalow Homes book billed itself as "the World's Most Popular Plan Book" and contained 105 different bungalow plans in a huge variety of stylistic designs. If you've ever driven through one of the early "first-ring" subdivisions in any American city, you've seen these houses, block after block of them. Stylistically, they fell into a range of categories: Spanish, Tudor, Colonial, Arts and Crafts, Southern. Whether built in stucco, brick, stone, or wood siding, they all shared a couple of common traits: they were modestly sized and they were affordable. This meant that they were also the right size for new suburban lots and that many families could now own their own home.

For an idea of how much things have changed since the early days, those bungalow plans sold for $7.50, including a materials list; duplicate sets were $2.50. (Readers of our Bungalow Homes Book were also asked, through an advertisement in the book, to consider a "Brown Disappearing Bed," which when not in use folded up into a handsome cabinet. That allowed a homeowner to use a room for double duty, say a living room or study during the day and a bedroom when needed—a precursor to modern multi-task rooms.)

As the years passed, the popularity of other styles caught up with the bungalows, though few designs exceeded it in variety and style (bungalows are still one of our best-selling plan types). Soon Garlinghouse was publishing books and magazines on Southern homes, cottages, vacation homes, duplexes, garage apartment homes, and Cape Cod-style homes (many of the suburbs built just after World War II were populated with Capes—Levittown, on New York's Long Island, comes most prominently to mind).

But the style that really caught fire—even more so than the bungalow—was the versatile ranch, which beginning in the 1940s quickly dominated new home construction. How do you describe the ranch? We've seen millions of these long, low, flat, unadorned and rambling houses, now fixtures of our residential landscape. Experts describe the ranch as a single-story home with a low-pitched gable roof, deep-set eaves, a horizontal shape, with a rambling layout that's long, narrow and low to the ground, either rectangular, L-shape, or U-shape, with large windows including double-hung, sliding, and picture windows—all in a simple floor plan. The one element that really set the ranch apart, however, was the openness of its shared rooms. That was the chief revolutionary design point that broke with the past. Today, nearly all new homes are designed in the versatile open-plan style, which creates a more pleasing and useful flow than earlier homes had, with their walled-off, use-specific rooms.

When the ranch made its appearance on the American suburban landscape, Garlinghouse (which by now had adopted the tagline "America's Pioneer Home Planning Service") was there. Throughout the 1950s, 1960s, and deep into the 1970s, Garlinghouse featured the latest ranch designs in magazine after magazine with titles like Blue Ribbon Homes, Home Plans for Better Living, Ranch and Suburban Homes, Choice Selected Homes, Deluxe Home Plans, and Suburban Living Home Plans. The original color drawings for each of these magazine covers featured sprawling homes drawn in the same style as the automobile ads of the day: Everything looked bigger than life and colorful as a Disney cartoon.

Even then Garlinghouse brought the American public what it wanted, a variety of good home designs, great customer service—and all at a great price. The company was also a creature of its time. An advertisement in a late 1950s issue of Ranch and Suburban Homes featured a couple of new Garlinghouse designs: an underground concrete shelter and a basement concrete block shelter, each set of plans selling for $3. According to the ad, "No matter where you live, a fallout shelter is necessary insurance."

Throughout the years, we at Garlinghouse have offered the public more than just plan sets for new homes. We've also offered plans for getaway dreams in the form of camps, cabins and assorted small retreat cottages. Kamp Kabins, published in the 1940s, featured homes ranging in size from small (under 1,200 square feet) to tiny homes (324 square feet) that today would fit entirely into the great-rooms of some houses. Lake Shore and Mountain Cottages gave Americans a chance to picture themselves getting away to their very own mountain log cabin, to a secluded bungalow in the woods, or to a small cottage on the lake. Although many of these plans were simply fodder for dreamers (and there's nothing wrong with dreaming), many actually got built.

The "miscellaneous" category has been another Garlinghouse strong point through the years. Income Property and Retirement Homes from the late 1950s offered a variety of ranch-style designs, now prominently featuring a revolutionary new concept in home enjoyment: the backyard patio. Our Lawn and Garden Ideas magazine showed just how wonderful the new suburban backyard could be, thanks to basket-weave fences, outdoor fireplaces, and something called "budget patios." Duplex Design showed readers how to build a new home and create income property at the same time.

Okay, not to pat ourselves on the back, but we have an interesting past. But so what if Garlinghouse was the first home plans company in the world? So what if our plans have been used to build more homes than plans from any other source. What does any of that have to do with your decision to buy a set of home plans?

The truth is, nobody should buy anything from a company just because that company has been around for a century - not unless that company uses its 100 years of tradition, experience, knowledge, market familiarity, and accumulated understanding of home design, family space requirements, and home construction to benefit you. And this we do.

A century of doing business and working closely with builders, homeowners, home designers, and architects has taught us a few things that some of the newcomers to the business may not have had time to figure out. We've learned that providing you with unequalled service, excellent technical assistance (we have experienced design professionals on staff to answer your questions and help guide you through the complex process of creating a new home), reasonably priced customization and modifications, and the best home designs in the world make our already great prices even more of a value to you.

We've provided home plans to generations of families, perhaps to your parents, grandparents, or great-grandparents. We enjoy the satisfaction that comes with being, at least in part, responsible for helping millions of Americans get something that today is nearly taken for granted: home ownership and the enjoyment, independence, and fulfillment that goes with it.

As has been the case throughout our history, The Garlinghouse Company today offers home designs in every style, type, size, and price range. We promise great service, solid and seasoned technical assistance, tremendous choice, and the best value in new home designs available anywhere.

If you find a house plan or garage plan featured on a competitor's web site at a lower price (advertised or special promotion price including shipping specials), we will beat the competitor's price by 5% of the total, not just 5% of the difference!

Whatever your needs, keep in mind that any plan can be changed and almost any change can be made through our modification service. We provide plan modification quotes at no cost for all participating designers.

By reading through our blog, we hope to inspire you with unique and beautiful featured house plans, garage plans and project plans in all shapes and sizes.